Erica
Erica is an Australian juggling a life between the land downunder and Stockholm where her husband works for part of the year. Erica is intrigued by life in Stockholm because it is so different to life in the antipodes! 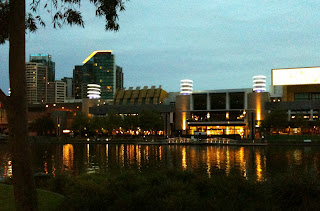 I love the city of Melbourne!

I’ve just driven Daughter Number 2 to the Melbourne Exhibition Centre to sit her penultimate exam and I have a few hours to kill before she’ll emerge with that glad-it’s-over-but-not-really-sure-how-it-went feeling.  I’m sitting beside the Yarra sipping a perfectly chilled sauvignon blanc on a perfectly warm evening. There are suited business people all around, winding down after a hard day at the office and t-shirted casual types just out enjoying the view. The architecture is interesting, the river is languid and the atmosphere is relaxed.

Helemeted, lycra-clad, back-pack toting cyclists weave seamelessly in and out of family groups, meandering couples, tourists with maps and people just wandering and wondering what wonderful Melbourne-food they should choose for dinner.  As I watch the passing parade, I can’t help but wonder what Swedish cyclists would think of the casual and flowing, “lane-free” approach to cycling on this promenade and I’m also wondering if cyclist behaviour is learned thing or a temperament thing. Are Swedes organised and linear and do Aussies go with the flow?

Bicycle lanes in Stockholm are clearly defined and heaven help the unsuspecting tourist who should step into the path of a determined, destination-oriented cyclist! I have been the target of the occasional expletive and the aggressive ringing of bicycle bells when I have inadvertently violated the Swedish cyclists' sanctioned space. My husband and I have often joked that if we’re to meet our demise in Stockholm, we’re more likely to be taken out by a bike than a car! Here the pace is slightly slower but the bicycle and pedestrian blend lends some pleasing grace and artistry to the otherwise pragmatic endeavour of two-wheeled commuting. There’s no bell-ringing and it all just seems to work.

Note: My grainy iPhone picture does no justice to this most photogenic city.  For some excellent local shots see http://www.melbournephotos.net.au/
Posted by Erica at 7:49 PM 2 comments:

I’m onto my second gin and tonic but (surprisingly) it’s not me who’s raucous, it’s the birds! It’s blissfully mild out in the backyard because Spring has finally settled in. Dinner is in the oven...yes, it’s still cool enough to cook...and I’m taking half an hour with an escapist novel under the lemon-scentd gum thanks to author Donna Leon who transports me to exotic foreign places even when I have heaven in my own backyard.

Swedish birds tweet in tones I can only describe as decorous. I am always amused by their dignified restraint. Even the skata don’t swoop and screech like the lorikeets and wattle birds currently decimating the delicate gum blossoms above my head.  Australian birds are loud, unruly and raucous. One local website categorises our backyard birds as hooters, cacklers, carollers, criers and screechers!

We took some Swedish friends camping in one of Victoria’s famous National Parks a few years ago and the dawn cacophony had them laughing in their tent along with the kookaburras. A dawn chorus it was Not! A chorus implies something melodic and Aussie birds know only decibels and disorderly! We all emerged from the warmth of our winter sleeping bags to walk down to Tidal River to enjoy the particularly unSwedish performance of wattle birds, yellow-tailed black cockatoos, magpies, kookaburras, sulphur-crested cockatoos and assorted other local avian types!

So as I sit and enjoy the sunset squawking and watch the burnished gold fade from the sensuous limbs of the gum tree I’m lucky enough to have in my own backyard, I’m thinking of the Swedish birds just waking and shaking their wings…and twittering their way into another northern hemisphere morning. 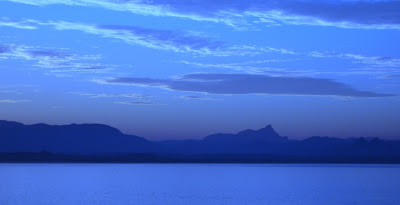 Without you I am blue.


Not the deep drowning blue of a thousand fathoms
But quiet and still like the soft blue haze of morning
With only the hum of my heartbeat to keep me company.

And there’s a midday blue as well
Brilliant, bright and so sharp it takes my breath away
Clear and sapphire-hard as your absence.

At day’s end, wrapped in the indigo blue of evening
Sprinkled with stars, yet empty
A melancholy blue that makes my heart ache.

You don’t need me to tell you there’s been a drought in Southern Australia for the last 10 years. It’s devastated many rural communities and destroyed many livelihoods, but over the past few weeks the drought has broken. You’d think this news would be welcome and we’d all be celebrating the sound of the steady, soaking rain. 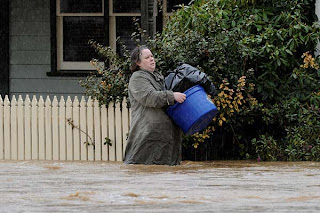 But no, much of this rain hasn’t brought respite or restoration, it’s a deluge. Rivers are flooding, levee banks are straining, sandbags are in short supply and people all over the state have been evacuated and inundated. This week, a woman who lives in a town which was in the centre of one of the most fire-ravaged areas on Black Saturday in 2009 said the floodwaters at the back of her property looked like a sea.

We live in a land of extremes. After the fires came the floods and now, as the floodwaters are receding, it’s pestilence. The Australian Plague Locust Commission …yes, it’s a real organisation…reports that locust egg beds up to 20 kilometres long have been exposed by heavy rains removing top soil and these eggs are expected to begin hatching as the weather warms up. Locust swarms are incredibly destructive and they have a particular penchant for green, lush growth. Read crops and gardens.  Experts are speculating that this could be one of the worst plagues in 75 years and that the area of farmland under threat is bigger than Spain! The Victorian Government alone has announced a $43.5 million package (291,842,000 SEK) to support farmers and regional communities to prepare and respond to the locust threat.

So against a backdrop like that, who’s game to sign up for the next season of “The Farmer Wants a Wife”?! For those of you who don’t know, this is an Australian reality TV show where farmers from remote areas get to meet and woo a bunch of city-girls looking for love and a change of scenery. It’s a romantic notion, but I think the producers should be doing some pretty rigorous psychological testing on these starry-eyed hopefuls because it’s tough out there. Really tough. As a city-slicker, I’ll be “hit” by price increases in the fruit and vegie section of the supermarket. Better that than a wall of flame, a wall of water or a suffocating cloud of voracious locusts I say. 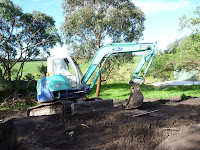 After more than a year of dreaming, planning, designing, redesigning and jumping through a million regulatory hoops, our builder and his team swung into action this week. Our block has been sculpted ready for building. I just want to go down there and sit in the sun and breathe deeply.

The photo-project has begun with about one hundred photos of bob-cats and other machines that can effortlessly rip out trees and stumps! My husband has never really outgrown the Tonka trucks phase so he had a ball documenting the transformation of a bush block to a building site. 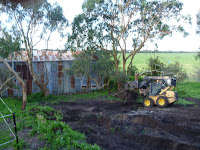 In the absence of the tea-tree canopy, we have a better picture of the view we’ll have out over the farmland to the far horizon. I’m even loving the galvanized tin shed which borders the rear of our property! Initially I thought it was an eyesore, but its patchwork of rusted panels is so quintessentially Australian, I see it now as a work of art in our own backyard!  I’m excited about getting to know our new equine neighbours, by the fact that our solar panels will soon be converting the sun into electricity for our home and I’ve already worked out where to plant the elegant and fragrant eucalyptus citriodora sapling that took root conveniently, in a pot plant in our city backyard last summer. 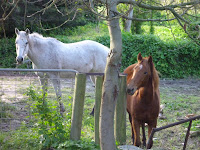 So for a while this blog will lose its Swedish flavour and take on the salty taste of the Australian coast because I’ll be here, not there…choosing tiles and paint colours instead of meatballs and vodka.
Posted by Erica at 6:10 PM 1 comment: 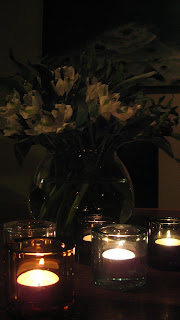 It’s cold in Melbourne but I confessed to a slightly incredulous friend today that I wished it was colder. Snowing in fact.

I was so enamored of Stockholm’s crisp, white winter this year that I wouldn’t mind donning a scarf, hat and gloves and turning up my collar against some drifting crystal flakes. Instead it’s a mild 9 degrees and there’s no snow in sight.

To brighten things up, I’ve been to the big blue and yellow store and stocked up on some Glimma for my Iittala votives. Whilst we don’t do winter darkness here with the same depth and duration as Sweden, the flickering of candles on my dining room table lifts my spirits. It wasn’t until my first visit to Sweden that I really understood the importance of candles in the winter-time. They provide light and movement and something indefinable that warms the psyche to inoculate against winter blues.

In Stockholm in midwinter, the sun rises and sets within about 6 hours. It hugs the horizon as if it doesn’t have the energy to push itself up any higher in the sky and it sinks leaving darkness to settle around 3.30 pm. Today we had 10 hours of daylight and patchy blue skies so we really can’t complain.

Even though it would be nice to have some snow. 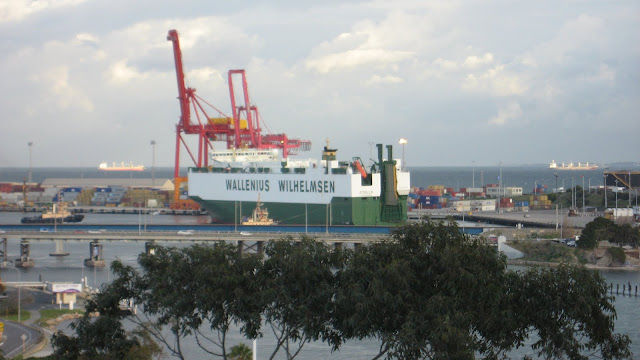 The Otello has just departed Port of Fremantle in Western Australia. I watched as the morning sun lit up the docks and the giraffe-like gantry cranes and this green and white monster slipped out to sea. She has a car carrying capacity of 6,700 and some happy Australians will probably be taking delivery of a new BMW soon. She has sailed off into an approaching storm and as I sit watching this massive vessel disappear over the horizon whilst the swell rolls in at Cottlesloe beach and ominous clouds darken the skies, I’m trying to imagine life at sea.

Daughter Number 2 lives in Fremantle and met our friend the sea captain who lives in Sweden and works for Wallenius Wilhelmsen when she visited Stockholm a few years ago.  She is chuffed to be able to tell her Aussie mates that she knows someone who has sailed these big ships into the port she can see from her window.  The sea captain is never short of a fascinating maritime story and opens a window of a different kind onto another world with his tales. I love listening to him talk about ports and people and about shipping technicalities and navigating the world’s oceans. It fires my curiosity and fills my head with images of rolling blue-green horizons and far-away destinations; visions and fantasies that have undoubtedly lured travellers to sea for millennia.

The Otello is a long way from home. The Wallenius Wilhelmsen online schedule says she left the German port of Bremherhaven on June 1st and arrived in Fremantle on July 7th. Vessels like the Otello count time in days and months whereas flight schedules count time in mere hours. We left Stockholm on June 19th and arrived in Melbourne on June 20th. Thirty hours door to door. The Otello’s voyage has taken thirty-seven days so far. And she’s not even on her way home yet.

So as my mind follows the Otello and her crew over the horizon and across the Great Australian Bite on their way to Melbourne, I’m thinking that sailors are made of stoic stuff. Despite my romantic imaginings, long periods of time at sea must be incredibly tedious and boring and loved ones must feel a very long way away.